The Best Paths project aims to overcome various technical barriers that the current pan-European electricity network could encounter to safely, efficiently and reliably integrate massive amounts of energy from renewable sources such as solar and offshore wind, satisfying demand competitively and reducing the levels of CO2 produced. 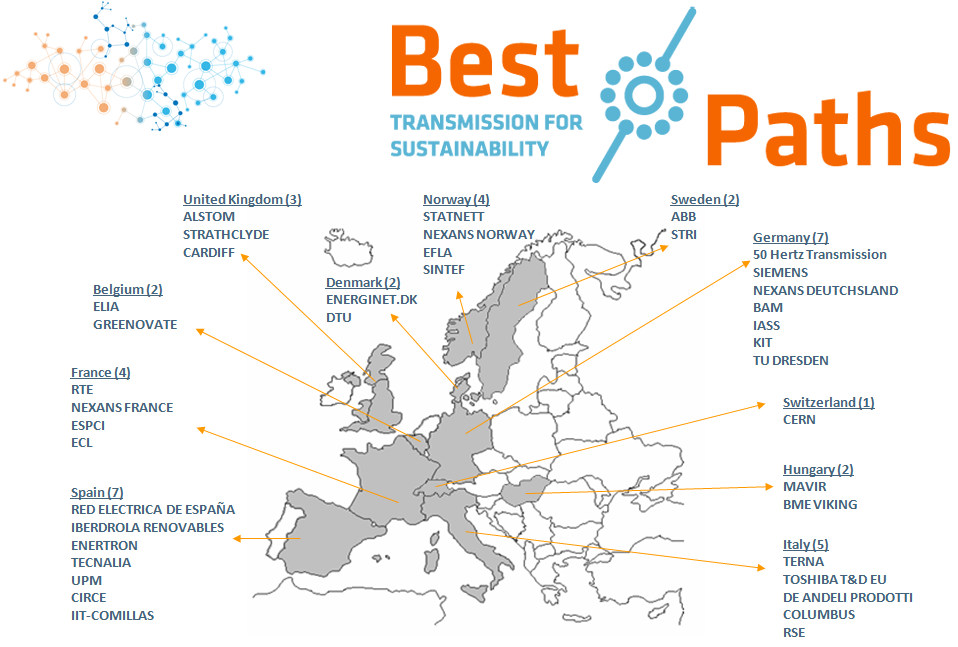 The project is developed around five different large-scale demonstration areas focused on working together to find complementary solutions to various existing technical constraints.

The Best Paths (‘BEyond State-of-the-art Technologies for rePowering AC corridors and multi-Terminal HVDC Systems’) project has a budget of 62.8 million euros, of which 35.5 million euros will be funded by the European Union. It is the largest European project of the Seventh Framework Programme for Research, Technological Development and Demonstration in the field of electricity grids.

Given that they have similar interests and needs, and that the TSOs do not compete with each other, collaboration in this type of projects provides great mutual benefits to all. For example, it enables technologies to be tested where they are most useful and which meet the right conditions. But, above all, it allows the costs and results to be shared, making it possible to substantially reduce the time to market of developed solutions.

Red Eléctrica has a direct implication in the demonstration on interoperability of HVDC converters (IOP demo) and the development of a novel low cost sensor for the monitoring of transmission capacity (DLR sensor) in overhead linesWith regard to IOP demo, recent experiences in carrying out renovation actions for existing GIS substations, the opening up to competition and not being a captive customer from the initial manufacturer has allowed REE to save up to 20% on a recent award. This experience, allows to pinpoint the potential savings derived from IOP demo at 10-15% of the current cost for future converters. The executed budget of the converter stations of the HVDC link between Spain and France in service since the end of 2015 amounted to €360 million (€45 million of estimated potential savings). Regarding the DLR sensor, it will be around k€3/eq, which represents savings of 40% compared to the cheapest sensors currently on the market removing the main barrier for its deployment.

Regarding the DLR sensor, it will be around €3,000/eq, which represents savings of 40% compared to the cheapest sensors currently on the market removing the main barrier for their deployment. Once Best Paths has concluded, a congested electricity line will be monitored, with the aim of increasing its transmission capacity by 5-10%. The cost is estimated at €350k and it is estimated that this will save operation costs in the Spanish electricity system between €150k and €300k per year.

Red Eléctrica acts in this project as a coordinator of a consortium of 39 partners, who are leaders in their respective fields, representing technology centers, industrial corporations, promoters and European TSOs from 11 different countries.