The VEGETA CYCLE project is aimed at developing a new methodology for cyclic control of vegetation that can help provide optimal vegetation management work plans and allows decisions to be made regarding their scheduling based on technical and economic prioritization criteria in order to more efficiently manage the vegetation management process in keeping with corporate responsibility.

This new methodology has addressed all the phases involved in the vegetation control cycle:

1st phase: Detection of initial needs using LiDAR inspections and including them on georeferenced vegetation maps.

2nd phase: Creation of optimal work plans using the VEGETA algorithm based on the data collected in the first phase as input data.

3rd phase: Management of the works and updating of the state of the vegetation in the Red Eléctrica information systems once they have been completed.

The project consists of the following phases:

1. Creation of the forest map of Red Eléctrica (MFREE).

2. Integration of the MFREE into the work structure of GEORED, the IT application for the geographic management of Red Eléctrica’s assets.

3. Modification of the type of anomalies related to the vegetation. 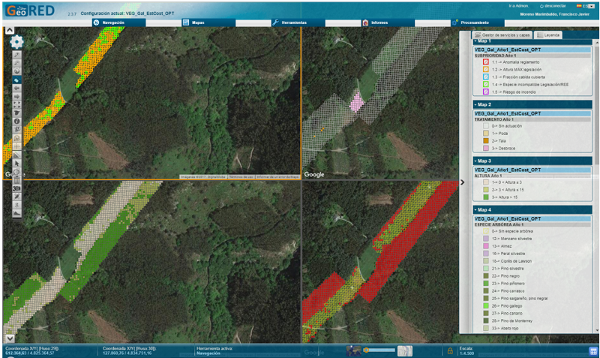 Several graphic results of the technical work plan that can be displayed in GEORED:

The implementation of the methodology developed in the VEGETA project will allow an economic optimization in the planning of the Red Eléctrica's vegetation treatment works, which will bring with it greater economic efficiency, in comparison with the current vegetation maintenance plans.

It is estimated that once the VEGETA project is fully implemented nationwide, it will represent a saving between 0.75 and 1 million euros per year in felling and pruning tasks. This implies that VEGETA would be profitable from the first year of use.

This important cost saving is obtained due to the following:

Overall, it is estimated that VEGETA will allow a 5% to 6% reduction in Red Eléctrica’s external costs for the management and treatment of vegetation.

The project is currently underway. It began in the second semester of 2015 and has been carried out in several phases. It is currently in the beginning stage of the study for its implementation nationwide.

Red Eléctrica leads this project, which has had the collaboration of TRAGSATEC, a subsidiary of the TRAGSA Group dedicated to R&D, a company responsible for the main actions of rural development and environmental conservation of the Ministry of Agriculture, Food and Environment and the IIC (Institute of Knowledge Engineering), a non-profit organisation that bridges the gap between universities and companies, and which is subordinate to the Autonomous University of Madrid.