Red Eléctrica, a subsidiary of Redeia responsible for the operation and transmission of the electricity system in Spain, has commissioned the first section of the Caparacena-Baza-La Ribina axis, comprised of various grid assets that are essential for the economic and social development of the province of Granada and for the whole of Eastern Andalusia, while at the same time boosting the green transition of the region.

The President of the Government, Pedro Sanchez, presided over the inauguration of the new Baza substation, in a ceremony that was also attended by the President of the Regional Government of Andalusia, Juan Manuel Moreno, and the Chairwoman of Redeia, Beatriz Corredor, together with other representatives and authorities from the government as well as from regional and local administrations, including the mayors of the municipalities in the area.

With an investment of close to €90 million, this first section of the axis encompasses the construction of the new Baza electricity substation and the new 400 kV line that will connect the latter with the existing Caparacena substation, located in the municipality of Atarfe. These two grid facilities are much needed in the territory not only to bolster the quality and security of supply and increase the capacity of the system to evacuate and use the high level of renewable resources in the region but also to enable the development of the Mediterranean Corridor high-speed railway network between Granada and Almeria, and bring top-quality optical fibre much closer to numerous municipalities in the region.

During the ceremony, Pedro Sánchez underlined the Government's objective of "turning Spain into a key driver/player of the energy transition in Europe in terms of renewable energy generation". The Prime Minister highlighted the key role of this new infrastructure in "placing Spain at the forefront of the energy transition in Europe and advancing the Government's threefold objective of strengthening territorial cohesion, modernising the productive and industrial network of Spain and promoting the green transition of the Spanish economy".

For his part, Juan Manuel Moreno stressed that “Andalusia is and will increasingly become a powerhouse in renewable energy. We want to be a leading and pioneering region in the energy transition in Spain and Europe because we have unrivalled conditions to generate projects, wealth and green jobs linked to sustainable energy, as well as clean energy for the whole of Europe, free of the pressure and complexities linked to the current situation and international tensions. To accomplish this, we need 'electricity highways' that enable the transmission of electricity. And today, with the opening of this first section of the Caparacena-Baza-La Ribina axis, we are closer to achieving this objective”.

The Chairwoman of Redeia, Beatriz Corredor, underlined the structural nature of these facilities, which have “finally put Eastern Andalusia on the electricity map, putting an end to a historical deficit in electricity infrastructure in the region”. She added that thanks to Red Eléctrica's commitment to the area and the entire region, with this first section “the province of Granada will enjoy an electricity supply of the highest quality, that will contribute to attracting new investment in the region as well as promoting the industrial development of the area and the creation of employment. It should be noted that this project will be carried out in a socially and environmentally friendly way because we have designed and built this infrastructure by listening to the different stakeholders in the territory and by adopting measures that contribute to ensuring that, once the works are completed, the area is far better than we found it”.

The project has been carried out following specific sustainability criteria and has had the participation of the relevant stakeholders in the territory in order to achieve the best solution from a technical, social and environmental point of view. A process in which Red Eléctrica has fostered a listening strategy and encouraged an open dialogue with the pertinent public administrations and local councils, as well as with organisations and society at large, in order to reach an agreement on the optimal solution with the least impact and that was compatible with the uses and activities of the population.

Red Eléctrica has carried out the execution of this first section of line with the utmost respect for the natural environment and the rich biodiversity of the area. Thus, for example, preventive measures have been taken to avoid affecting birdlife, such as biological stoppages during the breeding season or the installation of bird-saving devices on overhead lines.

The Company has also implemented measures to create shared value and improve the quality of life of the area's inhabitants. To this end, it has allocated more than 640,000 euros through different collaboration agreements with 15 municipalities in Granada, aimed at improving energy efficiency and self-consumption in public buildings, promoting digital connectivity (fibre optics) or the implementation of high-efficiency pumped-storage systems.

Thanks to this investment, a number of projects have been implemented that have a positive impact on more than 44,000 inhabitants and will generate savings during the useful life of the infrastructure in the following aspects: energy (with a reduction in consumption of 1.8 GWh), water (17,500 litres of water), emissions (with an estimated reduction of 4,000 t CO2) and economic (reducing the expenditure of municipalities by 4 million euros).

A strategic axis that will connect with Almería

The new section inaugurated today is the first of the Caparacena-Baza-La Ribina electricity axis, which will be completed with a second section to its final destination at the La Ribina substation (in the municipality of Antas, Almería); a project in which Red Eléctrica will invest more than €162.6 million. The completion of this infrastructure will be essential for Eastern Andalusia as it is currently the least electrically meshed area in Spain, something that has historically hindered the economic and social growth of the area. This axis will also contribute to powering the railway line that will enable the region to have a high-speed train between Murcia and Almeria in the near future.

The Company is currently working with the regional government on the design of this second section in order to agree upon the best project from a technical, environmental and social point of view. 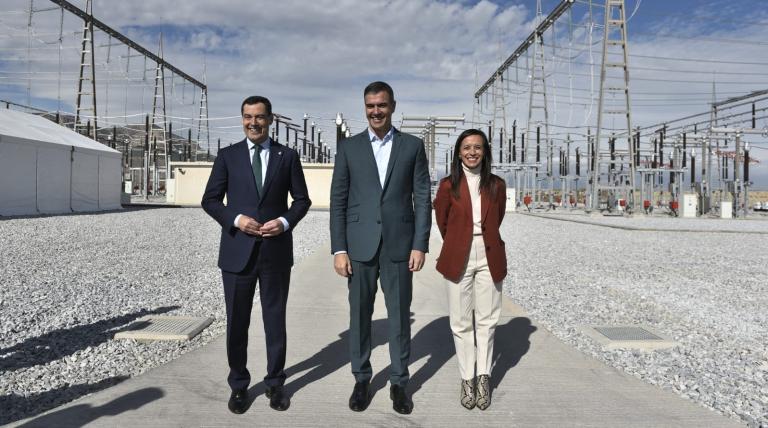 Prime Minister of Spain, Pedro Sánchez (at the center), standing next to the President of the Regional Government of Andalusia, Juan Manuel Moreno, and the Chairwoman of Redeia, Beatriz Corredor, in the Baza power substation. 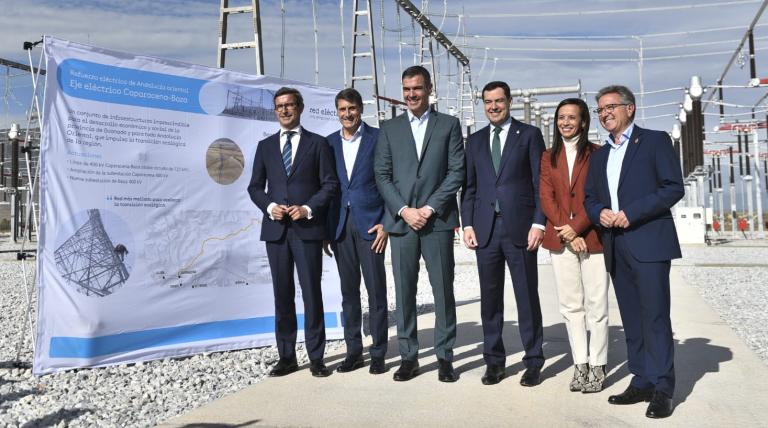 From the left to the right, Regional Minister of Andalusia for Industrial Policy and Energy, Jorge Paraleda, Spanish Government representative for Andalusia, Pedro Fernández, Prime Minister of Spain, Pedro Sánchez, the President of the Regional Government of Andalusia, Juan Manuel Moreno, the Chairwoman of Redeia, Beatriz Corredor and the Mayor of Baza, Manuel Gavilán. Prime Minister of Spain and President of the Regional Government of Andalusia standing with the Chairwoman of Redeia and a large representation of the national, regional and local administration, including the Mayors of the area. From the left to the right, Spanish Government representative for Andalusia, Pedro Fernández, the President of the Regional Government of Andalusia, Juan Manuel Moreno, the Mayor of Baza, Manuel Gavilán, the Prime Minister of Spain, Pedro Sánchez, and the Chairwoman of Redeia, Beatriz Corredor. Prime Minister of Spain, Pedro Sánchez, during his speech at the inauguration ceremony. Inside of the Baza power substation. 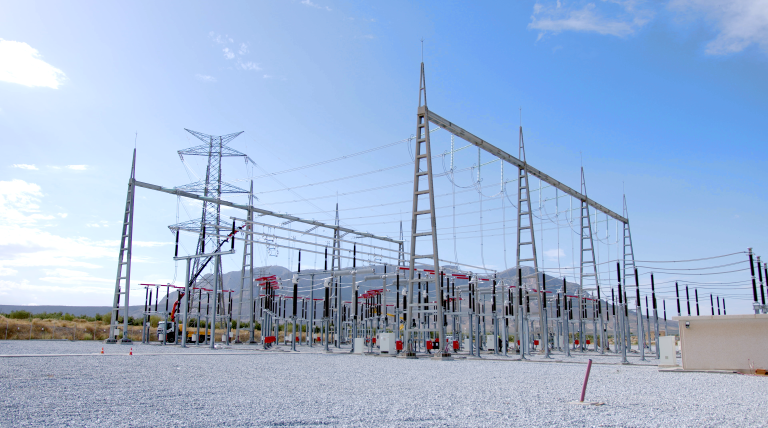 Section of the line of 400 kV Caparacena-Baza