One of the environmental aspects most comprehensively studied by Red Eléctrica is, unquestionably, that of electric and magnetic fields, due to the social interest and concern generated by their possible health impacts.

The Red Eléctrica generated levels remain below those recommended by the Council of the European Union thanks to preventive measures that are applied in the design of facilities.

Values in our installations

Like any other unit or apparatus that operates with electrical energy, high-voltage electrical power lines generate an industrial-frequency electric and magnetic field. Its intensity will depend on various factors such as the voltage, the electrical power transported, the geometry of the support, the number of conductors, the distance of the cables from the ground, and so on..

The measurements taken in Red Eléctrica's installations give maximum values (at the closest point of the conductors to the ground) that vary between 3 and 5 kV/m for the electric field and between 1 and 15 µT for the magnetic field in 400 kV lines. Moreover, the field intensity decreases very quickly as the distance from the conductors increases: at 30 meters distance the electric and magnetic field levels vary between 0.2 and 2.0 kV/m and 0.1 and 3.0 µT, respectively, normally being below 0.2 kV/m and 0.3 µT above 100 meters distance.

In the case of 220 kV lines these values are lower, with values between 1 and 3 kV/m for the electric field and 1 and 6 µT for the magnetic field being recorded at the point closest to the conductors. At 30 meters distance, the electric and magnetic field levels vary between 0.1 and 0.5 kV/m and 0.1 and 1.5 µT, respectively, normally being lower than 0.1 kV/m and 0.2 µT above 100 meters distance.

The concern for human health and the factors that can affect it have meant that since the 1960s, and particularly since the late 1970s, a multitude of studies have been performed on whether the electric and magnetic fields generated by electrical installations represent any kind of health risk. This research into the biological effects of electromagnetic fields has generated more than 25,000 scientific articles (according to data of the World Health Organization), which may make them the most widely-studied agent in history. These studies have mainly been performed in two spheres, the epidemiological and the biophysical.

The epidemiological studies performed in recent years conclude categorically that the electric and magnetic fields generated by high-voltage electrical power lines do not represent any risk for public health; in particular, they do not increase the risk of any type of cancer.

In spite of the exhaustive conducted studies, no biophysical interaction mechanism has been discovered that could explain how fields of such low frequency and intensity as those generated by electrical installations could produce long-term harmful effects (illnesses) on living beings.

The only known and proven effects of industrial-frequency electric and magnetic fields are the short-term effects, which range from simple discomforts like tingling of the skin or sparks on touching an exposed object to muscle contractions, but always at field levels much greater than those generated by electrical installations.

As for possible health impacts, biological experimentation in the laboratory, either in vitro exposing cells and tissues in culture to the action of fields or in vivo on complete bodies, has also discarded any relationship with carcinogenic processes, immune response, fertility, reproduction and development, alterations of the cardiovascular system, behavior, stress, etc.

In summary, it can be affirmed categorically that industrial-frequency electromagnetic fields do not cause any direct damage to the genetic material of the cells (DNA), and therefore do not produce malformations or cancer.

To prevent the possible short-term effects, various national and international agencies have drawn up regulations on exposure to electric and magnetic fields. At present the most widely-applied international regulations are those laid down by the International Commission on Non-Ionizing Radiation Protection (ICNIRP), a body associated with the World Health Organization.

The European Union, following the advice of the Scientific Steering Committee, took the ICNIRP's lead in drawing up the European Council Recommendation relating to exposure of the general public to electromagnetic fields (0 Hz to 300 GHz), 1999/519/EC, published in the Official Journal of the European Communities in July 1999. Its goal is solely to prevent acute (short-term) effects produced by the induction of electrical currents inside the organism, since there is no scientific evidence that electromagnetic fields are related with any illness whatsoever.

The international scientific community now agrees that exposure to industrial-frequency electric and magnetic fields generated by high-voltage electrical installations does not represent a risk for public health. Numerous scientific bodies of recognized prestige have expressed themselves in this respect in recent years. Among them we can highlight the following:

The Scientific Steering Committee of the European Commission, an independent and neutral scientific body, declared in June 1998 that: "... the available literature does not provide sufficient evidence to conclude the existence of long-term effects as a consequence of exposure to electromagnetic fields."

For our country there is special importance in the technical report "Campos electromagnéticos y salud pública [Electromagnetic Fields and Public Health]", drawn up by a committee of experts created by the Ministry of Health and Consumer Affairs and published in July 2001. This report reaches the following conclusion:

"It cannot be said that exposure to electromagnetic fields within the limits laid down in the European Council Recommendation (1999/519/EC) produces adverse effects for human health. Consequently, the Committee concludes that the fulfillment of the said recommendation is sufficient to guarantee the protection of the population."

Red Eléctrica's policy consists in complying with the existing international regulations and not questioning the results of the hundreds of studies that are published every year, since none of the scientific bodies of recognized prestige who have expressed their opinion in this respect in recent years has considered it necessary to modify their conclusions in the light of those studies. Moreover, Red Eléctrica performs a task of constant analysis and monitoring of the scientific studies, publications, foreign regulations and news on industrial-frequency electric and magnetic fields that appear at the worldwide level.

Red Eléctrica drafts and promotes publications dedicated specifically to electric and magnetic fields, with the aim of informing regularly on the state of knowledge in this matter. The most recent publications availables in Spanish are:

Among all of these references we can highlight the following bibliography, listed in chronological order:

The website created by the Official Physicists' Association of Spain includes a section on industrial-frequency electromagnetic fields.

In 1998, after studying all of the available documentation, the ICNIRP drew up a guide to exposure to electromagnetic fields of 0 Hz to 300 GHz, on which the European Union's recommendation is based.

A federal agency dedicated to studying the health problems related to the environment. It is in charge of directing the RAPID program of research into industrial-frequency electromagnetic fields, overseen by the US government. The website includes general information, advance reports on the program and reports on the evolution of the program's activities.

Scientific body of the US government. Includes the text of the report "Possible health effects of exposure to residential electric and magnetic fields", drawn up by the National Academy of Sciences at the order of the US Congress.

In 1996, the WHO set in motion the EMF International Project to study the effects of electromagnetic fields of 0 Hz to 300 GHz; it is expected to be completed in the year 2005. The WHO's website includes news, reports, press releases, announcements of congresses and information on the evolution of the project.

The scientific body of the US electrical industry. General information and details of its research program in this area

The company that operates the very high-voltage electricity transport grid in England and Wales. A website with abundant information on industrial-frequency electric and magnetic fields, addressed to both professionals and the general public.

There are two types of electric currents: direct and alternating.

Direct current (DC) is current that flows from one point to another always in the same direction. An example of this is the current that circulates when a device is connected to an electric battery.

Alternating current (AC) is current that flows from one point to another, periodically changing direction over time. The frequency of this change is a characteristic magnitude that is expressed in cycles per second orhertz (Hz): where 1 Hz = 1 cycle per second. The frequency is defined for each electrical system, but may vary from one system to another. For example, in Europe, it has a value of 50 cycles per second (50 Hz) while in the United States and Canada, it has a value of 60 Hz. In any case, its values are always what is called the extremely low frequency or industrial frequency. 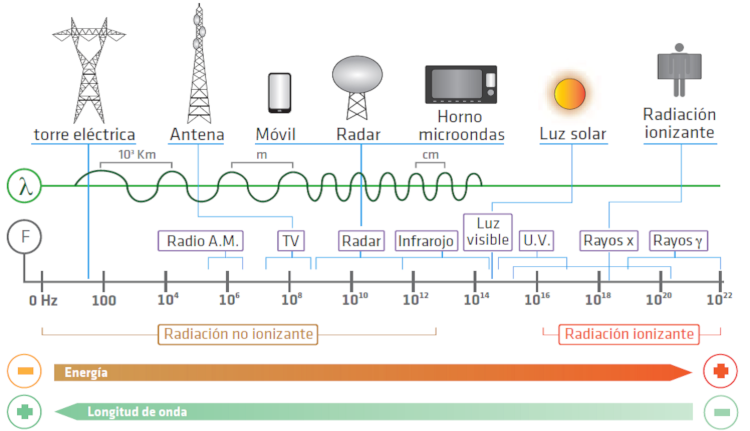 In general, electrical systems operate with alternating current, but it is becoming more common to include specific direct current connection in the systems, mainly to connect two distant points and minimise energy loss. In these cases, traction substations are needed to convert from one type of current to the other. Direct current (DC) generates a static field, which is a field that does not vary over time. There is a natural electrostatic field that is due, supposedly, to the currents circulating in the Earth’s core. The intensity of the Earth’s magnetic field varies with latitude: from 25 μT at the magnetic equator (30 μT at the geographical equator) to approximately 67 μT at the poles. In Spain, the natural static magnetic field is around 40 μT.

Some of the specific characteristics of static fields are:

In terms of the possible effects on humans, it is important to also consider the effects of the spatial loads (generated by the corona effect) in terms of the density of the current of ions at ground level. The ion current will charges insulated objects close to the line and could produce discharges such as those produced by electric fields. Unlike lines that operate with alternating current, where limits have been established by international organizations for the currents induced in the human body due to fields that vary over time, no such general use limits exist for direct current. Given that the potential effects of fields and ions in the proximity of direct current lines, they are more annoying than harmful and it is difficult to determine these limits. To avoid this, reference values of 25-30 kV/m for the maximum electric field and 100 nA/m2 for ion current density are considered during the design of the lines. This prevents even these annoying effects.